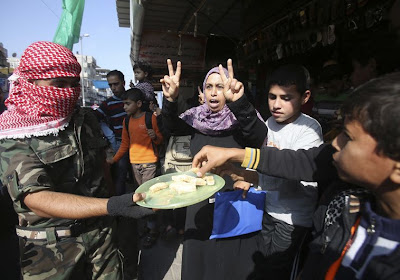 Masked Palestinian distributes sweets as he celebrates with others an attack on a Jerusalem synagogue, in Rafah in the southern Gaza Strip

They’re approving of hit-and-run attacks on Israeli civilians, and of stabbing whole families to death in the homes in the middle of the night. They’re glorifying and celebrating savagery. Just don’t call it that, you racist, bigoted Islamophobe. “Poll shows strong Palestinian support for attacks,” The Associated Press, December 9, 2014.

An overwhelming majority of Palestinians support a recent spate of attacks on Israelis amid heightened tensions over the most sensitive holy site in Jerusalem, according to an opinion poll released Tuesday.

The poll also found that more than half of Palestinians support a new uprising against Israel, and that the Hamas militant group would win presidential elections if they were held today.

Palestinian pollster Khalil Shikaki said the results reflected Palestinian anger over Israeli statements about the Jerusalem holy site, which is revered by Jews and Muslims, as well as a loss of hope following the collapse of U.S.-brokered peace talks and Israel’s recent war with Hamas in the Gaza Strip.

The Palestinian Center for Policy and Survey Research interviewed 1,270 people in the West Bank and Gaza last week. The poll had an error margin of 3 percentage points.

“There is an environment in which violence is becoming a dominant issue,” said Shikaki. “This seems to be one of the most important driving forces.”

There has been a spate of attacks in Jerusalem over the past month and a half, at a time of rising tensions over the contested holy site, revered by Muslims as Noble Sanctuary and by Jews as the Temple Mount.

Prominent members of Israel’s government have become more vocal in recent months about demands that Jews be allowed to pray at the Muslim-run site, which is home to the Al Aqsa Mosque and iconic Dome of the Rock.

Many Palestinians fear this is a pretext for a gradual Jewish takeover — a claim Israel denies.

The poll found 86 percent of respondents believe the shrine is in grave danger from Israel. It said 80 percent supported individual attacks by Palestinians who have stabbed Israelis or rammed cars into crowded train stations.