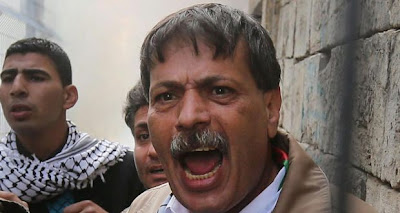 Liberman said the PA's accusations that Israel had "murdered" Abu Ein were baseless and meant only to incite the Arab population; the PA also threatened to suspend its security cooperation with Israel as a result of his Abu Ein's death, and PA chairman Mahmoud Abbas referred to Abu Ein's "martyrdom."

"The delusional accusations of excessive use of force and of 'Israel is responsible for murder,' as a representative of the Palestinian government said, bear witness only to the motives of the Palestinian inciters who do everything to worsen the conflict," said Liberman.

An autopsy from the Abu Dis Forensics Institute revealed Abu Ein suffered from existing medical conditions and died of a heart attack while clashing with IDF troops in an olive-planting land-grab march of 300 activists.

The autopsy noted "the deceased suffered from ischemic heart disease; blood vessels in his heart were found to be over 80% blocked by plaque. Old scars indicating that he suffered from previous myocardial infractions were also found."

"The state of Israel and IDF soldiers time after time prove that despite the fact that we are dealing with organized violent acts and with difficult situations that no other democratic government in the world is forced to deal with, we do it as well as is possible," said Liberman.

While Arab sources claimed Abu Ein was struck by soldiers and died of wounds, video from the clash shows that wasn't the case, and that after he started showing signs of a heart attack a female IDF medic tried to offer him aid which he refused.

Abu Ein was a member of the Fatah Revolutionary Council, which is also known as the Abu Nidal Organization - a recognized terrorist organization in the US for over 20 years.

He was handed a life sentence in Israel in 1982 after being extradited from the US in 1981 over the murder of two Israelis in Tiberias in 1979. Abu Ein planted the explosives which killed the two - Boaz Lahav and David Lankri hy''d.

But he never served his life sentence over the callous murders - he was released in the Ahmed Jibril prisoner swap deal in 1985, just three years later.

Most recently he held a post leading the PA committee against "settlements," after previously being the PA Deputy Minister of Prisoners' Affairs, leading a ministry tasked with providing funds to Arab terrorists jailed in Israel to reward them for their crimes. That ministry's task was shifted to Palestine Liberation Organization (PLO) control, with Abu Ein saying at the time in June that it was done so as to dupe foreign donors. 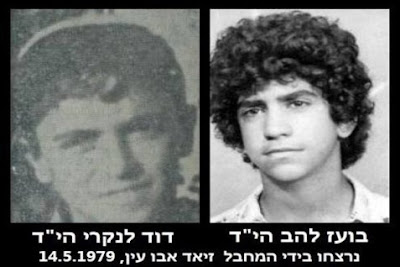 LET'S REVEAL THE TRUTH ABOUT THE DEATH OF Ziad Abu Ein