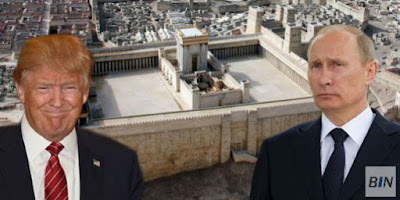 The Nascent Sanhedrin is calling on Russian President Vladmir Putin and US president-elect Donald Trump to join forces and fulfill their Biblically-mandated roles by rebuilding the Jewish Temple in Jerusalem.

Rabbi Hillel Weiss, spokesman for the Sanhedrin, contacted Breaking Israel News to announce that the election of Trump, who has promised to recognize Jerusalem as the capital of Israel, coupled with Putin’s expressed desire for the Temple to be rebuilt, prompted the Jewish court to send a letter offering the two the opportunity to act as modern-day Cyrus figures: non-Jewish kings who recognize the importance of Israel and the Temple.

Cyrus the Great, King of Persia in the sixth century BCE, announced in the first year of his reign that he was prompted by God to make a decree that the Temple in Jerusalem should be rebuilt.

'Thus saith Koresh king of Paras: All the kingdoms of the earth hath Hashem, the God of heaven, given me; and He hath charged me to build Him a house (temple) in Yerushalayim, which is in Yehuda.' Ezra 1:2

Cyrus sent the Jews under his rule back to Israel with a considerable sum of money with which to rebuild the Temple. The Sanhedrin plans to call on the two world leaders to take up this ancient Biblical decree and support the Jewish people in their holy mission.

Rabbi Weiss explained that the US elections have made the eternal Jewish dream a very real possibility.

“We are poised to rebuild the Temple. The political conditions today, in which the two most important national leaders in the world support the Jewish right to Jerusalem as their spiritual inheritance, is historically unprecedented,” Rabbi Weiss told Breaking Israel News.

The Sanhedrin’s letter notes that Trump’s upset victory was due to his support of Jerusalem, and reminds Trump of his campaign promise to move the US embassy from Tel Aviv to Jerusalem, effectively recognizing the city as the capital of Israel. The Jerusalem Embassy Act, passed in Congress in 1995, initiated the moving of the embassy, but has been vetoed since every American president since. The Sanhedrin calls on Trump to withhold the veto after he takes office.

The Sanhedrin also recalled Putin’s connection to the Temple in its letter. During his third official trip to Jerusalem in 2012, Putin paid a late-night visit to the Kotel (Western Wall). When he arrived at the holy site, the Russian leader stood in silence for several minutes, offering up a personal prayer, after which he read Psalms from a Russian-Hebrew prayer book.

An Israeli bystander called out in Russian, “Welcome, President Putin.” Putin approached the man, who explained the importance of the Temple Mount and the Jewish Temple. Chadrei Charedim, an Orthodox Hebrew news site, reported that Putin responded, “That’s exactly the reason I came here – to pray for the Temple to be built again.”