Jews and Christians Must Stand up to Their Abusers 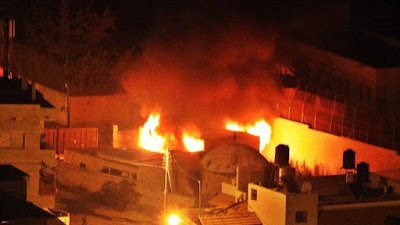 In October, hundreds of Arabs entered the Joseph’s Tomb compound in Shechem (Nablus) and set it on fire, severely damaging part of the Jewish holy site, which is said to contain the remains of the biblical patriarch. To make matters worse, the UN cultural body known as UNESCO has asserted that the Cave of the Patriarchs in Hebron and the Tomb of Rachel on the outskirts of Jerusalem are an integral part of ‘Palestine’.

Such instances of cultural vandalism against Jews are of little interest to the rest of the world. But when ‘Palestinian’ and Muslim leaders allege that Israel is attempting to change long-standing arrangements that bar Jews from praying on the Temple Mount (a claim denied by Israeli Prime Minister Benjamin Netanyahu), the media and the international community go wild, as did the Arabs who used the rumours as an excuse to start a stabbing intifada against Jews.

There is a basic flaw in this reaction. The stabbings are excused and written off as a consequence of alleged changes to the status quo on the Al Aqsa compound, but attacks on Jewish holy sites are reported as merely part of the so-called cycle of violence, which essentially absolves Arabs of responsibility. While Al Aqsa continues to be under strict Islamic control, Jewish holy sites are apparently up for grabs. Not only is UNESCO (at the behest of several Arab nations including Algeria, Morocco and Egypt) trying to de-Judaize Joseph’s tomb and the Cave of the Patriarchs by declaring them integral parts of ‘Palestine’, the organisation almost succeeded in declaring the Western Wall a Muslim holy site.

So we have a situation where UNESCO and Muslim revisionists are attempting to rewrite history by appropriating Jewish holy sites and, in a very literal sense, destroying any trace of an historic Jewish presence. For years, the Jerusalem Islamic Waqf (the trust that controls and manages the Temple Mount) has allowed illegal digging at the site. Not only have Palestinian excavations of Temple Mount damaged the structure, valuable historical artefacts have been thrown on to rubbish dumps.

Once the evidence is destroyed, it’s easy to create a new narrative and then claim ownership over the land. By doing this, the Arabs and their Muslim backers are in a position to negate Judaism and Christianity (which has close historic, biblical and theological ties to the Jewish faith). Jews and Christians do not realise that decisions made by UNESCO and the Arab authorities represent a violation of their respective religions and their shared histories. Once destroyed, Muslims can say what they like. If Ishmael is replaced as the legitimate heir of Abraham, and all traces of Isaac’s lineage are destroyed, then Muslims can gain sole rights to Eretz Israel and God’s promise.

A seventh grade history book in California has already attempted to re-write history by stating that Hagar was Abraham’s first wife, therefore legitimizing Ishmael’s lineage. Why is this so important? Why should anyone care who has legitimate rights? It’s important because these events are not occurring in a vacuum. Look at other parts of the Middle East where Muslims are committing acts of genocide against Christians and destroying their cultural legacy. But the problem does not stop there. The Islamist political agenda is world dominance. The intent of radical Muslims is to rid the world of all non-believers – not only Jews and Christians but also Hindus, Buddhists, and more.

In order to undermine Christianity, the Islamists first have to go to its source – Judaism. If they can wipe Judaism off the face of the earth, then they can eradicate Christianity, which is Islam’s closest rival in terms of numbers. The methodology to achieving this goal is multi-pronged, involving verbal attacks, ideological clashes, historical revisionism and ultimately murder. Sadly, the Islamists are winning their war because many Jews, Christians and people in Western countries unwittingly support them.

Why are so many deaf, dumb and blind to what is happening? For Christians it is the premise of ‘see no evil speak no evil, hear no evil’. This is predicated in the teachings of Jesus who said, “If anyone slaps you on the right cheek, turn to them the other cheek also.” (Mathew 5:39) However, for Jews, who have been treated badly for three thousand years, embracing the enemy is based on survival instinct. Christians are expected to love their enemies, but some liberal-minded Jews (as a result of learned helplessness) go so far as to defend their enemies in the same way that a victim of domestic abuse defends his or her attacker.

On her blog, Christina Enevoldsen describes how she perpetuated the cycle of domestic abuse: through submission, she believed she was protecting herself. She believed she could make her husband a better person, if she was good enough. She taught other women that good behavior was the best way to protect themselves. “Of course, placating abusers is no protection at all and only perpetuates the cycle,” she writes, before adding:

“The only thing that stops abuse is standing up to abusers. To stop being a victim, I had to admit that I had been a victim. I had to recognise how powerless I was (in past cases of abuse) – that there wasn’t anything I could have done to stop him. I had to see that it was a lie that I could control an abuser by my good behavior. Only by identifying with my powerlessness then, could I take back my power… Now that I stand up to abusers instead of trying to make them happy, for the first time in my life, I’m not being abused.”

What liberal Jews need to understand is that by attempting to be “good,” by placating and not antagonizing their attackers, they are actually perpetuating the cycle of abuse that made them victims in the first place. Likewise, liberal Christians fail to see that their compassion is both misplaced and misinterpreted as weakness. When your front door is broken down, you do not protect yourself by walking on egg shells, or by being silent, or by turning the other cheek.

We, Jews and Christians, must acknowledge that we are being attacked by a vicious, relentless enemy. We must face up to the reality of the situation and realise that placating does not help. The abuser-victim paradigm in which we tolerate ‘Palestinian’ propaganda or pacify Islamist terrorists does not lessen the danger; on the contrary, it increases the threat level. Being tolerant of the intolerant is liberalism at its worst, and keeps us stuck in a perpetuating cycle of powerlessness. It in no way defends our freedoms, our liberty or our values.

We need to act, before it is too late to protect our Judeo-Christian values. We need to break this cycle, stand up to our abusers and empower ourselves. Before we become fossils – frozen in the annals of time, or worse, a heap of ashes, burned like Joseph’s tomb. 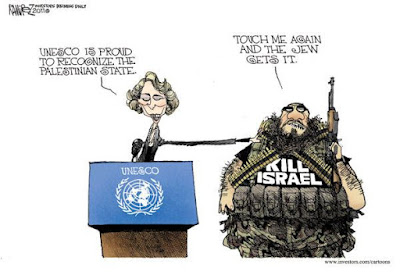