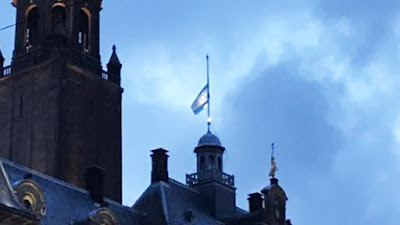 The Rotterdam city hall building, in the Netherlands.

The Israeli flag was flown from Rotterdam city hall in the Netherlands on Monday evening in a show of solidarity with the Jewish state after a terror attack in Jerusalem killed four IDF soldiers on Sunday.

While the flag was displayed over the municipal building, the Brandenburg Gate in Berlin was lit with the Israeli flag in another demonstration of support from Germany. 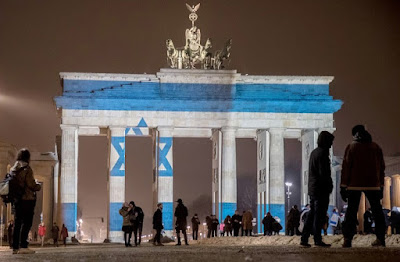 Our Comment: Raising flags or lighting buildings will not help. The only right answer to this islamic terror against Jewish people and Israël is: Annex Judea & Samaria, clear and annex Gaza, remove/deport some hateful arabs from Israël.
Gepost door Henoch op dinsdag, januari 10, 2017