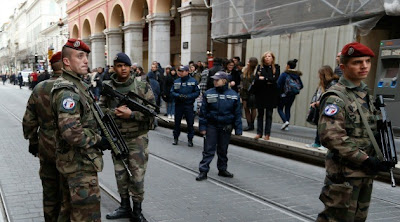 A man with a knife hidden in his bag attacked three soldiers on an anti-terror patrol in front of a Jewish community center in southern France on Tuesday, two police officials said.

Sarah Baron, a police union official in the city of Nice, said the man was detained after the attack near the Galeries Lafayette department store. Nice Mayor Christian Estrosi said the attacker had an identity card with the name Moussa Coulibaly.

The surname, which is relatively common for families of Malian descent, is the same as that of the man who seized hostages in a kosher supermarket in Paris and gunned down a policewoman last month.

Another police official said the attacker pulled a knife at least 20 centimeters (8 inches) long out of a bag and set upon one of the soldiers, injuring him in the chin. He then swiped two other soldiers — one in the cheek, the other in the forearm — before being apprehended by riot police stationed near the building, which houses the city’s Jewish community center.

A manager at the center, who did not want to be identified because she was afraid, confirmed soldiers posted in front of the building were attacked. She said it happened around lunchtime and no one was inside the office.

The attacker, aged about 30, had a record of theft and violence, the official said on condition of anonymity because the investigation was ongoing. His motive was not yet clear, the official added.

A French security official said the attacker had been sent home by Turkish authorities last week after flying in on a one-way ticket.

Turkey is a transit point for jihadis from Europe to join up with Islamic extremist groups fighting in Syria and Iraq. 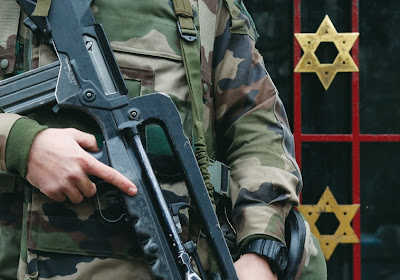