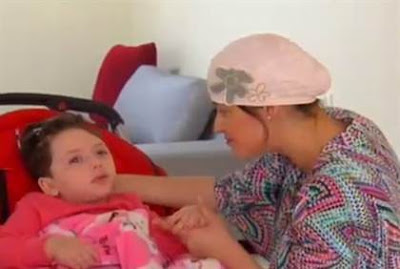 Infant terror victim Adelle Biton struggled for her life for nearly two years after suffering critical neurological damage from an Arab rock attack, a struggle that ended on Tuesday when she passed away. Now a new unexpected struggle has begun - to have her buried in her hometown.

After Adelle passed suddenly following a rapid deterioration in her situation this week due to a bout with pneumonia, Biton's family decided on Tuesday evening that they wanted to bury the four-year-old in the town of Yakir in Samaria where they live.

The bereaved parents Adva and Rafi contacted Deputy Samaria Regional Council Head Yossi Dagan, as well as the rabbi of Yakir, Rabbi Aharon Kohen, asking that land be prepared for use as a cemetery within the municipal borders of the town.

The Council located 20 dunams of suitable land within the municipal borders of the town, and contacted the IDF Civil Administration that is responsible for administering Judea and Samaria due to the fact that the region has yet to be annexed.

However, the Civil Administration refused the request, citing the lack of a master plan for a cemetery in the 20 dunam area.

Given the need to bury Adelle quickly, Dagan urgently contacted Prime Minister Binyamin Netanyahu's office and spoke with Cabinet Secretary Avichai Mandelblit, demanding that the office get involved on the matter.

"It cannot be that a girl who turned into a terror victim will not be able to be buried in the town she lived in just because of a bureaucratic matter," said Dagan. "We demand from the prime minister in the name of the Biton family that he get involved immediately so that we can bring this holy girl to true burial as soon as possible."

Adelle was critically wounded in March 2013, when the family car was attacked with rocks outside of Ariel in Samaria by Arab terrorists, causing the car to crash. The fist-sized rock struck Adelle directly in the head, leaving the two-year-old baby critically wounded; doctors said her recovery from the blow was nothing short of miraculous. Adelle had been in and out of the hospital since then in a grueling rehabilitation period.

Samaria Regional Council Head Gershon Mesika, who together with Dagan was with the Biton family to support them in the hours before Adelle passed, strongly condemned the refusal to bury the infant terror victim.

"Adelle was murdered only because she was a Jew. It is unthinkable that because of bureaucratic problems the holy Adelle will not be buried in a cemetery in Yakir," said Mesika.

The regional head added "I call on the prime minister to order the Administration not to act with bureaucratic inflexibility, and to allow the burial of Adelle in Yakir in the place she so loved."