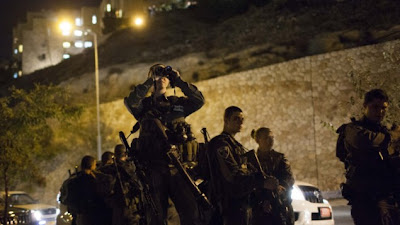 An Israeli Border Police officer searches for the remains of a missile that was fired from the Gaza Strip and landed near the West Bank settlement of Gush Etzion.

For the first time since the Hamas terror organization took over Gaza and began firing their barrage of rockets towards Israel, an air raid siren was sounded in Jerusalem and the surrounding area late Friday afternoon.

Just one day after terrorists successfully shot off a long-range missile aimed at Tel Aviv, it seems Israel's capital city is Hamas's next target.

Hamas immediately took credit for the attack, claiming to have shot "an improved Kassam," according to Channel 2. The launch represents the first Hamas rocket attack aimed at Jerusalem.

Reports are surfacing that the rocket hit the Judea and Samaria city of Gush Etzion, just south of Jerusalem, Israeli police said on Friday, with the army reporting no injuries or damages.

"Preliminary information shows that a rocket fell in Gush Etzion in Judaea and Samaria and police are on their way over there," spokeswoman Luba Samri told AFP.

The army confirmed that a rocket fire from Gaza had landed "outside of Jerusalem" but would not specify further.