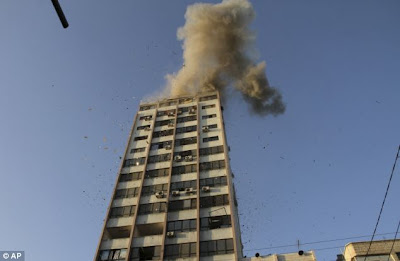 No journalists were wounded in the reported aerial attack on a media center in Gaza, an IDF spokeswoman told Arutz Sheva Sunday morning.

AFP and other foreign media continued to repeat Hamas claims and reported a claim by health ministry spokesman Ashraf al-Qudra who was quoted as saying, "At least six journalists were wounded, with minor and moderate injuries, when Israeli warplanes hit the al-Quds TV office in…Gaza City.”

He said that witnesses reported extensive damage to the building and that journalists had evacuated after an initial strike, which was followed by at least two more on the site.

Several Hamas claims already have been proven false in the latest escalation of the missile war against Israel. Hamas staged for foreign media a man supposedly wounded and being hauled away into an ambulance, but the same man was seen minutes later walking on his own, as seen here. The BBC featured both shots and was shown up by HonestReporting.

The IDF has released a video showing Hamas' propaganda lies, as seen here.

Hamas reports of deaths and injuries are reported by fawning media although almost never verified, a tactic that Hamas has perfected and used successfully against Israel in the Operation Cast Lead four years ago.

Following the first days of Israel’s counterterrorist maneuvers, highlighted by the killing of Hamas’ military commander-in-chief, Hamas began reverting to its old tactic of reporting that women and children were victims of the counterterrorist campaign. During the Operation Cast Lead, documentation proved that Hamas hauled out pictures of dead children who, it turned out, actually had died from illnesses or accidents unrelated to the war.

Since foreign media coverage in Gaza is severely restricted, reporters depend on Hamas claims without even noting that they could not be verified.

“Medics said 48 Gazans had been killed by early Sunday and more than 450 injured since Israel launched its air campaign on Wednesday,” AFP reported as fact, for example, without bringing Israel's assessment. It continued to refer to Hamas terrorists as “militants.”