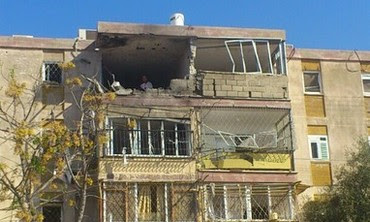 Gaza terrorists continued to fire rockets into southern Israel on Thursday morning killing three people and injuring two others in Kiryat Malachi. More than 200 rockets have been fired from Gaza into the South in the 24 hours after the IDF launched a campaign Wednesday to root out the terror infrastructure in the coastal territory, beginning with the targeted killing of Ahmed Jabari, the chief of Hamas's military wing.

MDA paramedics treated five wounded people at the site of the Kiryat Malachi attack, in which a rocket hit a four-story building. Three people were pronounced dead on the scene and two others were suffering moderate injuries, including a baby. 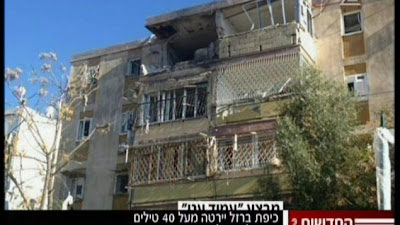 Gaza's terror groups continued to fire rockets on Israel's south overnight and on Thursday. Three people – two men and a woman – were killed in the morning when a rocket hit an apartment building in the city of Kiryat Malachi.

The victims didn't make it to the fortified stairwell in their building, which did not have a viable shelter. Two people were seriously injured, one boy was moderately hurt and two infants sustained light wounds. Several others suffered panic attacks. Another building in the city was directly hit, but no injuries were reported. Hamas' military wing accepted responsibility for the attacks.

A rocket barrage targeted Ashdod, with one projectile hitting a home but failing to cause casualties. A school in Ofakim was also hit. Salvos targeted Beersheba, Ashkelon and Gan Yavne and other areas as well. Some of the rockets were intercepted by the Iron Dome missile defense system.