Firebombs Most Common Form of Terrorism in Judea and Samaria. 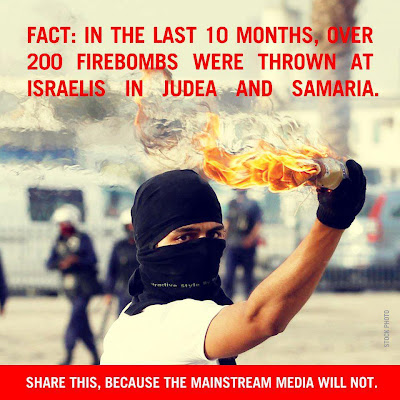 Firebomb attacks continued to be the most common form of terrorism in Judea and Samaria during the month of October, according to the monthly report by the Israel Security Agency (Shin Bet).

The report, which reviews the number and nature of terror attacks each month, found that that 68 out of 70 terror attacks in Judea and Samaria during October were firebomb attacks. In addition, there was one stabbing attack and one attack using explosives.

The figure is similar to statistics for the month of September, when 65 attacks out of 67 in Judea and Samaria were firebomb attacks.

The report also found that there were 31 attacks in Jerusalem in October, compared to 28 in September. In Jerusalem, too, most were firebomb attacks.

The Shin Bet noted there was not a significant change in the number of attacks in Judea and Samaria. In Gaza, however, an increase was recorded in attacks, specifically because of the recent escalation in rocket attacks from Gaza at southern Israel.

The report also noted the attack by Hamas terrorists on an Israeli aircraft which flew over Gaza using shoulder-mounted anti-aircraft missiles. It was the first time such an attack took place, noted the Shin Bet.

The missiles missed their mark so no injuries or damage were reported. Air Force sources said the missiles were apparently of the Strela SA7 variety, although it could have been a different missile. The smuggling of such weapons into Gaza has been rumored for years, since the use of shoulder-mounted weapons in an attack on an Israeli passenger jet in Kenya, which also failed.

Road terror has been on the rise in Judea and Samaria. In addition to firebombs, Israeli motorists have been targeted by rocks thrown by Palestinian Authority Arabs.