What in the World Ever Happened to Judea and Samaria? 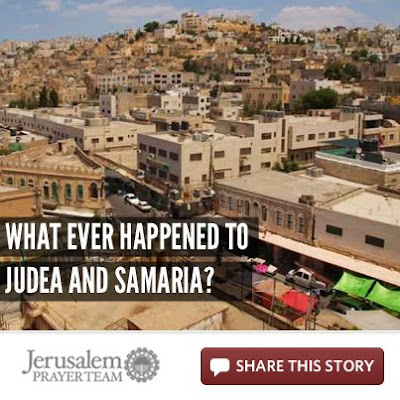 While you may not care where Carmen Sandiego is, you may wonder whatever happened to the Biblical areas of Judea and Samaria. Perhaps before we address “where they are” we should take a quick Biblical historical look at each.

Judea gets its name from the tribe of Judah, and referred to what is also known as the southern kingdom after Israel was divided, almost directly after the death of Solomon. The northern kingdom continued to be known as Israel.

Samaria was the capital of the northern kingdom for a number of years. The Judeans considered the Samarians ethnically impure.

Now, the reason you virtually never hear of these areas any longer is because today they, along with eastern Jerusalem, are collectively known as “the West-Bank.” In 1948 King Abdullah of Jordan captured Judea and Samaria and killed or displaced all of the Jewish people living there. In order to reduce Jewish claims to the area the King dropped their Biblical names and announced the area would henceforth be known as “the WestBank” of the Kingdom of Jordan, as it was located beyond the westbank of the Jordan River.

As unbelievable as it may seem, this was not the first time that “re-naming” was used to hide a despicable act. In 1931 Japan seized a major part of Manchuria in northeast China and set up a puppet government in 1932, after renaming the area “Manchukuo.” The puppet state existed until 1945 and the surrender of Japan.