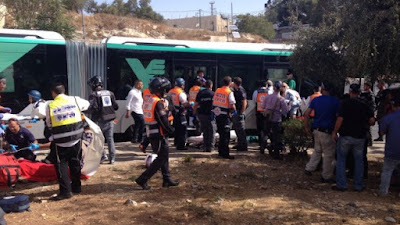 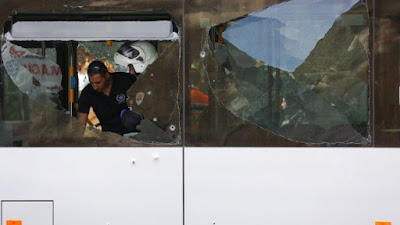 Three people have been killed and as many as 17 others injured - some of them seriously - in two near-simultaneous terrorist attacks in Jerusalem.

In the first incident, a 60-year-old man was killed and 15 others wounded, eight seriously, in a shooting attack on a Number 78 bus traveling along Gallows Street in Armon Hanatziv.

Magen David Adom and United Hatzalah paramedics at the scene described chaos and multiple severe casualties. A second, critically wounded victim succumbed to his wounds nearly two hours later, bringing the death toll in that attack up to two.

The attack involved two terrorists, one of whom was shot dead by police. The second terrorist was shot and wounded, and has been taken into custody.

Early investigations indicate that the terrorists intended to hijack the bus, along with its passengers. It is not yet clear what they intended to do with the vehicle or their hostages afterwards. 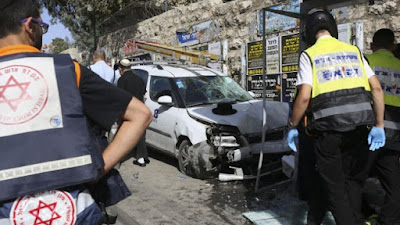 Minutes after that attack, a car and knife attack took place on Malchei Yisrael street.

The terrorist in that attack reportedly plowed his car into a bus stop and then emerged brandishing a knife, stabbing several passersby.

One person, later named as Rabbi Yeshiyahu Krishevsky, was killed in that attack, and another person was wounded. Paramedics treated the injured victim at the scene before transporting him to hospital in light condition.

The terrorist was himself killed after being shot by a security guard, as well as several border police who arrived on the scene shortly afterwards.

He has been identified as Jerusalem resident and Bezeq telephone company employee Alaa Abu Jamal. Abu Jamal carried out the attack with his company car and was even wearing his uniform at the time.

Our comment: Terrible evil Islamic madman! We do not know what kind of drugs this guy has taken, but even after several bullets in his body, he is standing up again, possessed by evil allah spirits.
Gepost door Henoch op dinsdag, oktober 13, 2015