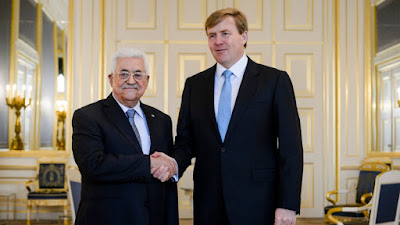 This is one of the most horrendous, horrific, embarrassing, and shameful photographs, that I have seen in recent time.

Our Dutch King, receiving and shaking hands with one of the most vile, evil lying persons in this world today: the Islamic Arab terrorist Abu Mazen (Abbas) of the PA.

Everybody knows, about the lying tongue, the anti-Semitic evildoing, and Jew and Christian hatred of this man, and still they are welcoming him as a legitimate politician and Statesman. How evil and twisted can this generation be?

One of the reasons that this event happened, can be, that they have common ground in the occult Bilderberg-Club of Freemasonry, where they swore an oath also on the Koran! Also Abbas is coming here, to get our money for his Palestinian terrorist organisation, which he is using to try to eliminate and destroy the Jewish state of Israel.

We are very ashamed of our King Willem-Alexander, to let this happen before the camera and press!

Here a recent video of Abu Mazen (Abbas) inciting Palestinians in Arabic by glorifying Arab Palestinian terrorists, who are committing stabbings and murders of Jewish people in Jerusalem. Claiming the Temple Mount is Islamic and their possession and that the Christian churches in Jerusalem are all Islamic and theirs too, and must be conquered. Saying all Jews and Christians have dirty feet!