Deuteronomy 32:13 - “He made him ride on the high places of the earth, that he might eat the increase of the fields; and he made him to suck honey out of the rock, and oil out of the flinty rock.” 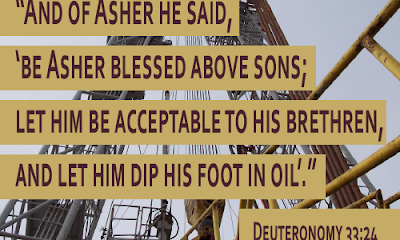 A giant oil deposit has been found in the southern Golan Heights and estimates are that the amount of oil found will suffice to make Israel self sufficient for many years to come.

Globes quoted Afek Oil and Gas Chief Geologist Dr. Yuval Bartov as saying, "We are talking about a stratum which is 350 meters thick, and what is important is the thickness and the porosity."

"On average in the world, strata are 20-30 meters thick, so this is ten times as large as that, so we are talking about significant quantities. The important thing is to know the oil is in the rock and that's what we now know."

Large amounts of oil have thus far been found in three drillings that have taken place in the southern Golan Heights. The potential for production is in the billions of barrels. Israel consumes about 100 million barrels of oil per year.

"Although the existence of the oil in the ground is a fact," wrote Globes, "the critical phase now is to check how easily it can be extracted and whether it involves high production costs. In a period of very low oil prices, extraction will have to be relatively cheap to make exploitation of the field profitable."

Bartov said, "There is enormous excitement. It's a fantastic feeling. We came here thinking maybe yes or maybe no and now things are really happening."

Israeli entrepreneurs have succeeded in finding huge natural offshore gas reserves in recent years, but their exploitation has been held up by leftist pressure to abrogate contracts the government made with the entrepreneurs and increase the government's share in the gas fields.

Exploitation of the Golan oil discovery is opposed by environmental groups. "This is likely to make any potential extraction from the ground and production a more protracted process lasting many years," according to Globes.