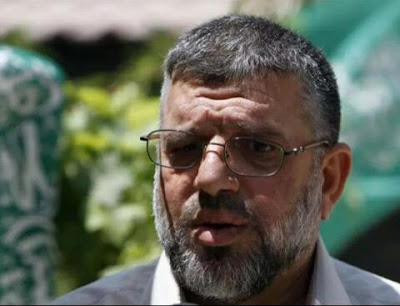 "During the night, forces of the army and the Shin Bet (internal security service) arrested Hassan Yousef, a Hamas leader, in Beitunia, southwest of Ramallah," an army statement said.

Hamas claims that Hassan Yousef, a seasoned terrorist leader who has spent years in jail and was elected to the Palestinian Legislative Council (PLC) parliament in 2006 while in Israeli custody, has worked entirely in the "political wing" of the terror group, which largely leads the diplomatic offensive against Israel and secures weapons and backing. But Yousef has a long and seasoned arrest record, and is considered a prime spokesperson for the terror group.

Yousef was first arrested in 1971, and then again in 2006. Most recently, he was arrested shortly after the abduction and murders of Israeli teenagers Gilad Sha'ar, Naftali Frankel, and Eyal Yifrach in June 2014; he was released after a short period.

Father of the "Green Prince"
Yousef is also known for having disowned his son, Mosab Hassan Yousef, after he worked as an informant for the Israel Security Agency (ISA) under the codename "The Green Prince."
The younger Yousef went public several years ago with having been a top source of inside information on Hamas's terror activities in the service of Israel's domestic security service during the Second Intifada that began in 2000, when Hamas carried out dozens of suicide bombings and other attacks against the Jewish state.

He has since reportedly converted to Christianity and fled to the United States, and likewise published an auto-biography of his fascinating work thwarting Hamas's terror schemes. His family have disowned him.