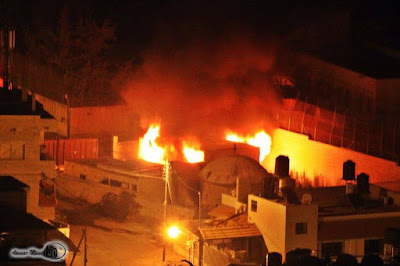 About 150 Palestinian Arabs on Thursday night arrived at the Joseph’s Tomb compound in Shechem and tried to set it on fire.

IDF soldiers who arrived at the scene surrounded the compound and used protest dispersal means to chase away the Palestinians, who began throwing rocks and firebombs at the soldiers.

The soldiers were able extinguish the flames. Initial reports indicated that damage was caused to the women's prayer area. There were no injuries.

Joseph's Tomb came under attack and in May 2000, during which it was destroyed and burned by Palestinian Arabs. It was eventually restored and, since that time, Jews regularly visit the site and pray there.

A year ago, Palestinians tried to set fire to the compound, but were dispersed by the Palestinian security forces.

Jews and Christians Must Stand up to Their Abusers
Gepost door Henoch op vrijdag, oktober 16, 2015