"(In the days of Noah), Adonai saw that the people on earth were very wicked, that all the imaginings of their hearts were always of evil only." - Genesis 6:5 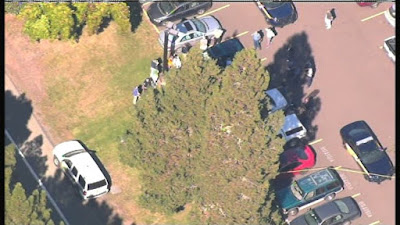 Chris Harper-Mercer, 26, has been identified by law-enforcement officials as the gunman who shot and killed at least 10 people and injured 20 at a community college in Roseburg, Oregon, according to the New York Times.

“He appears to be an angry young man who was very filled with hate,” one law-enforcement official said. Officials said Mercer lived in the area but was not a student at the college.

Douglas County Sheriff John Hanlin said the gunman was killed during a confrontation with officers shortly after they arrived at Umpqua Community College. The first 9-1-1 calls came in at 10:38 a.m. PST.

On the dating site he affiliated with several interest groups, including “Magick and Occult.”
Kortney Moore, 18, from Rogue River, Oregon, heard a shot come through a window while in her writing class, the News Review Today reported.

Moore, who witnessed her teacher’s execution, said the shooter asked people to stand up and state their religion before firing his weapon.

“[He started] asking people one by one what their religion was. ‘Are you a Christian?’ he would ask them, and if you’re a Christian stand up. And they would stand up and he said, ‘Good, because you’re a Christian, you are going to see God in just about one second.’ And then he shot and killed them,” Boylen, the New York Post reported.

"Be alert and of sober mind. Your enemy the devil prowls around like a roaring lion looking for someone to devour." - 1 Peter 5:8

"Therefore rejoice, O heavens and you who dwell in them [in the presence of God]. Woe to the earth and the sea, because the devil has come down to you in great wrath, knowing that he has only a short time [remaining]!” - Revelation 12:12