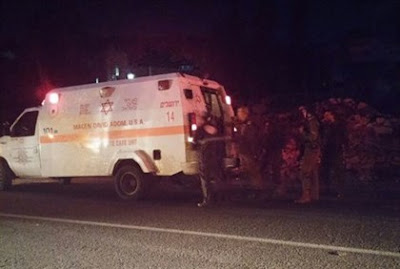 An Arab terrorist attempted to run over a number of Israelis in Judea's Gush Etzion region on Wednesday night.

According to initial reports, Arab rioters threw rocks at two Israeli vehicles - one a security vehicle, the other private - on Route 60 between Beit Ummar and Karmi Tzur.

Soldiers from the military vehicle exited their car carrying weapons to confront the rioters and were subsequently plowed down. The terrorist was shot and seriously injured by additional security forces on scene.

Hatzalah medics provided medical treatment to four Israelis injured - one seriously, and three lightly - in the attack. All four victims were brought by Magen David Adom paramedics to Hadassah Medical Center in Jerusalem.

Eyewitnesses to the attack say the terrorist saw the soldiers exit their vehicle to confront the rock-throwers, whereupon he veered his car and deliberately ran them over.

Gush Etzion Regional Council head David Perl responded to the attack by praising the IDF forces for their quick response and efforts to protect residents.