About women who are brainwashed by evil Islam 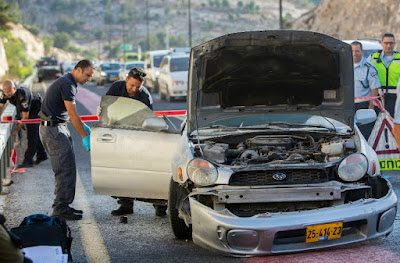 A Palestinian woman detonated explosives in her car at a checkpoint near Jerusalem.

The woman, 31, from Jericho, was seriously injured in the explosion at a checkpoint near the West Bank city of Maale Adumim on Sunday morning. She was taken to Jerusalem’s Hadassah Hospital in Ein Kerem for treatment. An Israeli policeman also was injured in the alleged attack.

The woman reportedly shouted “Allahu Akbar,” or God is great, before detonating the explosives, and tried to jump out of the car right before the explosion, according to police. The car carried a canister of gas, police said, which may indicate that she had intended to carry out a larger attack.

The woman, whose car had Israeli license plates, was pulled over for driving a “suspicious vehicle” in a carpool lane, according to police. The Palestinian Maan news agency reported that the car had an “electrical problem” which ignited a small fire in the car.

The police officer who was lightly wounded when a terrorist's explosive device went off described the scene: