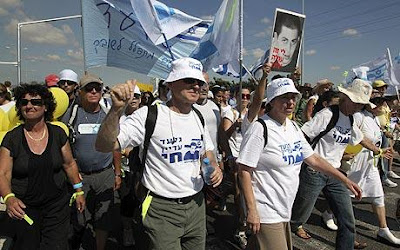 The parents of Sgt. Gilad Shalit, the Israeli soldier seized during a cross-border raid by militants from the Gaza Strip, started on a long march from northern Israel on Sunday to mark four years since his capture.
Flanked by hundreds of supporters, they set out on a 12-day march to Jerusalem to press their government to make a deal with Hamas militants to win his freedom. His parents say they will camp outside Prime Minister Benjamin Netanyahu's official residence until the government wins the release of their 23-year-old son, who has not been seen in person since he was seized.
"Today we say, 'We won't wait any longer, we won't wait any longer in our home,"' Schalit's father, Noam Schalit, said before the start of the march. Israel's leaders, he added, "have to put an end to this sad saga".
Thousands, including supermodel Bar Refaeli and dozens of local celebrities, are expected to join the march from the Schalits' home in northern Israel to Jerusalem. Police spokesman Micky Rosenfeld said about 2,000 supporters accompanied the family as it left its home in the small community of Mitzpe Hila on the Israel-Lebanon border. Many wore yellow ribbons or T-shirts with the soldier's photo.
Israel has agreed to release many of the 1,000 Palestinian prisoners that Hamas wants freed, but has balked at freeing some who were convicted in deadly attacks on Israelis. It also objects to releasing them to their homes in the neighboring West Bank for fear they would establish militant footholds there, and wants them deported.
Schalit's ordeal has touched a nerve in Israel, where military service is compulsory for most Jews, and almost all Jewish families have relatives who serve. The march dominated Israeli newspapers Sunday, and one leading daily, Haaretz, implored the government to make the necessary concessions to bring Schalit home. A recent poll suggested that a large majority of Israelis would be willing to see convicted killers released so he could go free.
The Schalits launched the protest march after Israel eased its blockade of Gaza last week without assuring their son's release. Israel began restricting the movement of goods into and out of Gaza after Schalit was captured, hoping to pressure Hamas to release him, and later imposed an all-out blockade after Hamas overran the territory a year later.
That embargo was eased in recent weeks after a deadly Israeli raid on a blockade-busting flotilla drew an international outcry over the plight of 1.5 million Gazans affected by the embargo.
Schalit's parents now say the Israeli government has abandoned their son and lost important leverage over Hamas by easing the blockade.
Bron: telegraph.co.uk 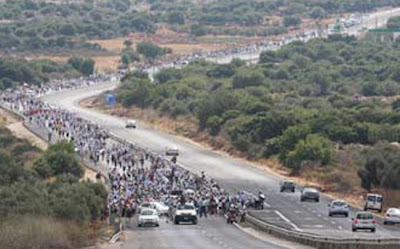 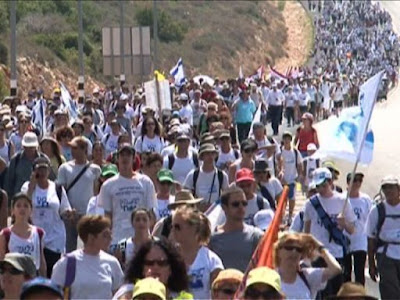 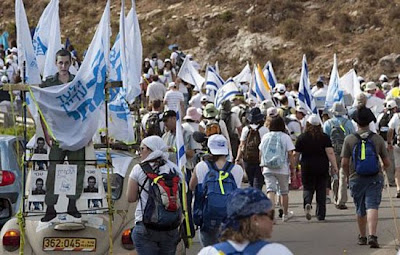