Gaza terrorists bombarded cities in Israel's southern region Saturday night. One person was killed when a Grad rocket hit Be'er Sheva, and another two were critically wounded. Four others were wounded as well, and are in serious-to-moderate condition.

Earlier in the day a 4-month-old baby, a 20-year-old man and 9-year-old boy were among those wounded when a Grad Katyusha missile fired by Gaza terrorists struck a home in Ofakim.

In total, terrorists have fired 45 rockets since Thursday night, wounding a total of 22 people. Four are in serious condition, suffering life-threatening wounds.

The Iron Dome system has shot down some rockets. On Saturday night it took out a rocket aimed at Be'er Sheva (see video-footage below).

Hamas has officially ended an often-broken ceasefire with Israel, openly involving Gaza's leadership in the attacks.

The IDF has responded by hitting several terrorist outposts in Gaza.

'Many Miracles' Despite Tragedy in Be'er Sheva Missile Attack 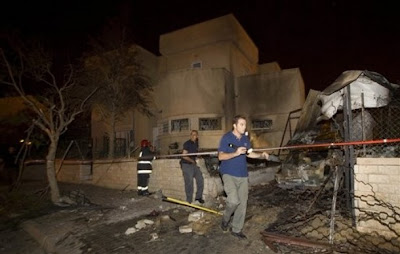 Israeli security officers inspect a damaged house hit by a rocket fired by Palestinian militants from the Gaza Strip in the southern Israeli city of Beersheba, Saturday, Aug. 20, 2011. Israel's rescue service says one Israeli was killed and about a dozen injured in barrage of Palestinian rockets from Gaza on southern Israel.

Residents of Be'er Sheva documented events in their city Saturday as Hamas launched a large-scale attack, with rockets raining down upon the city. The Iron Dome system's intervention was also caught on film.