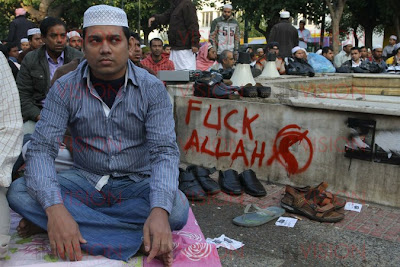 This picture was actually taken in Aghios Panteleimonas square, Athens, Greece. Given its content, I'm sure you won't be too surprised to hear that Greece has decided to ban Shari'a law.

Reports are coming from Greece that Shariah Law will be abolished with regard to Greek Family Law. These reforms are being met with applause from many people in Greece and around the world. This will mean that in Greek civil courts, Muslims, who are the only state recognized minority, will not be able to use Shariah law to establish the right of polygamy and the inequality of Muslim women to men. The Greek courts will also use Greek laws to regulate the family and hereditary relations of all Greek citizens. By enacting this law the consequences include the elimination of the judicial authority held by the Mufti who will only remain as the religious leader of the Greek Muslims.

In support of anti-Shariah law the National Committee on Human Rights has stated that Shariah Law actually abuses the rights and values of all Greek Muslims rather than protecting them. The Committee has determined that Muslim Shariah law is not compatible with the Greek Constitution as these national laws are equally applicable for both men and women.

The significance of this ban is indicative of the growing awareness public officials have of the failure, not to mention dangers, of multiculturalism in their countries with regard to Muslim non-assimilation. This has led to an impassioned discussion in numbers of countries for the enactment of anti-Shariah laws and regulations regarding illegal immigration and quota systems for legal entry.