Brazil's Historic Drought Is Showing No Signs Of Abating

We've allready reported about God's Judgement on Brazil (and other nations) for turning against Israel, by recognising a 'palestinian' state. 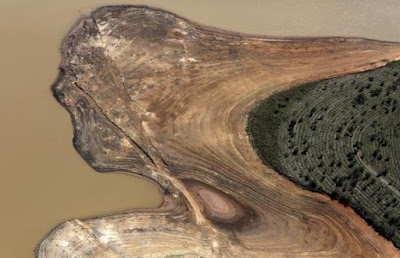 Brazil’s worst drought since the 1930s doesn't seem to be letting up anytime soon. Halfway through its rainy season, reservoirs remain critically low, blackouts have been plaguing cities and officials are urging residents to cut back on consumption. Drastic water rationing may be coming soon to three of Brazil’s most populous states, which could amplify frustration that has already been simmering against local and state authorities.

São Paulo, home to around 20 million Brazilians, has been the focal point of the prolonged water crisis, and has been feeling the effects for months: 2014’s rainfall levels were the lowest on record there, and the Cantareira reservoir system -- the largest of São Paulo’s six reservoirs -- is only at around 5.1 percent of its capacity, according to water utility company Sabesp. This week, São Paulo officials said some areas could face severe water rationing if rainfalls don’t return to normal, suggesting that the 6 million people served by the Cantareira water system might be getting as few as two days of water service a week.

That’s a stark about-face for the state government, which had in recent months downplayed the chance that water rationing would be necessary. But rationing has already become a part of daily life for São Paulo residents, who have been seeing reduced water availability during overnight hours.

As the situation grows more desperate, other states are scrambling for ways to cut back on water usage. According to Brazil’s Folha de S.Paulo newspaper, 93 cities have already instituted rationing. The main reservoir in Rio de Janeiro state is operating at zero capacity, according to the federal water agency, although officials have noted plans to divert water from other sources to prevent rationing until at least July. In Minas Gerais, the home state of President Dilma Rousseff and a prime coffee-producing region, officials have asked companies and residents to cut back water usage by as much as 30 percent.

Brazilians have also faced rolling blackouts in recent weeks as hydropower resources dwindle, heightening fears about impending energy rationing on top of the water shortage. Hydroelectric dams provide some two-thirds of the country’s energy. For some residents, the lack of water and light in the midst of boiling summer temperatures has pushed them to the brink: Scattered protests have broken out in some municipalities, including São Paulo, in recent months.

Analysts have highlighted climate change, Brazil’s population surge and deforestation all as factors that have contributed to the current crisis. But Brazilians have been pointing fingers at local and state officials for poor planning and failing to upgrade municipal pipe systems. A government reported released this month said that 37 percent of treated water was wasted due to pipe failure before it even reached residents’ taps, based on data from 2013.

Meanwhile, the drought is also tapping another source of simmering resentment: the upcoming 2016 Olympics in Rio de Janeiro. A small contingent of protesters has lashed out against a newly constructed golf course in Rio for what they say is a waste of taxpayer funds and precious water resources. Bloomberg News noted one sign at the Occupy Golf protests last weekend that read: “There’s water for golf, but not the population.”

Brazil's worst drought in 80 years from the air, in pictures