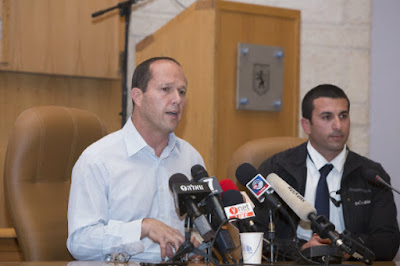 Terrorist stabbing attacks are sadly becoming common enough that most are no longer surprised by news of the latest incident. But Sunday’s terrorist stabbing on the streets of Jerusalem did catch widespread attention because it was brought to a halt by none other than Mayor Nir Barkat.

The attack took place at IDF Square where the Jerusalem Municipality meets the corner of the Old City. A young Palestinian man, like many “lone wolf” terrorists before him, approached an Orthodox Jewish man waiting at a crosswalk and stabbed his victim from behind.

The Jewish man jumped and swung his bag to keep the terrorist at bay as he retreated across the street. The terrorist began to slowly cross street, still threatening his wounded prey and other passersby.

It was at this point that traffic cameras (see below) recorded Barkat and his bodyguards bravely march into the intersection and confront the terrorist. Barkat demanded that the terrorist drop his knife. As soon as the weapon hit the ground, Barkat pounced, quickly subduing the attacker with the help of one of his bodyguards.

Barkat was then seen crossing the street to assist and comfort the victim, later identified as 27-year-old Avraham Goldschmidt, a local father of four. On Sunday evening, Barkat visited Goldschmidt at Jerusalem’s Sha’are Zedek Hospital, where the victim was listed in stable condition.

Goldschmidt recalled frantically calling out for help, and his surprise when that call was selflessly answered by Jerusalem’s mayor, who had seen the attack unfold while waiting in his vehicle at the intersection.