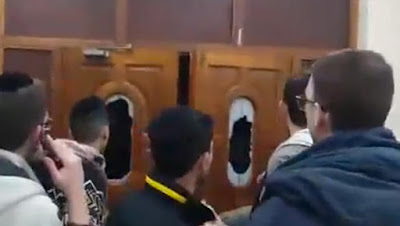 Police arrested six men after a group of 20 or so tried to violently force their way into a London synagogue late Saturday night, according to multiple reports.

In a video posted to YouTube that appears to show the incident, members of the Ahavas Torah synagogue in Stamford Hill can be seen defending themselves with chairs and other objects amid loud cursing and an apparent assault by an unseen group just outside a pair of doors with broken windows.

It is unclear what kicked off the incident, but police expressed doubt it was a planned attack.

"The incident is being treated as an anti-Semitic incident, due to remarks made by one of the group," London's Metropolitan police said in a statement. "However, there is nothing to suggest it was a planned or targeted attack."

Rabbi Maurice Davis of the Ahavas Torah synagogue, backed up the police statement, telling the BBC: "I think this incident was more anti-social than anti-Semitic."