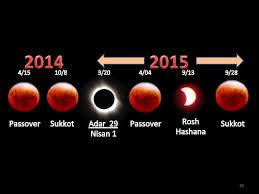 A rare astrological event set to take place next week could herald the “end of days,” according to some who have been following the blood moon phenomenon.

The internet is awash with forecasts, from cataclysmic catastrophes to the Rapture, as a fourth lunar eclipse in two years — the series is known as a tetrad — will fall on the first night of the Jewish holiday of Sukkot taking place on September 28.

Some Christians believe the celestial event could mark the start of disaster, based on a passage from the Book of Joel, which reads: “The sun shall be turned into darkness, and the moon into blood, before the great and the terrible day of the Lord comes.”

Blood moons are full lunar eclipses in which the sun’s rays entering through the earth’s atmosphere make for a red, or blood-like, appearance. The first three instances of the current tetrad have already occurred on Jewish holidays, on April 15, 2014 (Passover) and October 8, 2014 (Sukkot) and April 4, 2015 (again on Passover).

According to popular American evangelical pastor John Hagee, the blood moons are historically linked with a time period “that begins with a tragedy and ends with a triumph” for the Jewish people.

In an interview with the Christian Broadcasting Network, Hagee claimed that in each era, “there’s a sense in the world that things are changing and God is trying to communicate with us in a supernatural way.”

Spain’s expulsion of its Jews and discovery of the New World in 1492, the establishment of the State of Israel in 1948, and the Six Day War in 1967 are the last three times the blood moon tetrad occurred, according to Hagee.

Hagee narrates the history of the phenomenon and the possible future in his book “Four Blood Moons: Something is About to Change,” which has been turned into a motion picture in honor of the event.

Whether Hagee’s predictions come true or not, the eclipse will be visible over Europe, the Middle East, Africa, and the Americas on Monday, September 28, for approximately one hour and 11 minutes. In Israel the eclipse will begin at 3:12 a.m.

Our Comment: We expect that the sign of this last blood red moon means, that Israel soon is forced to go again to war, against the Arab Islamics surrounding them. 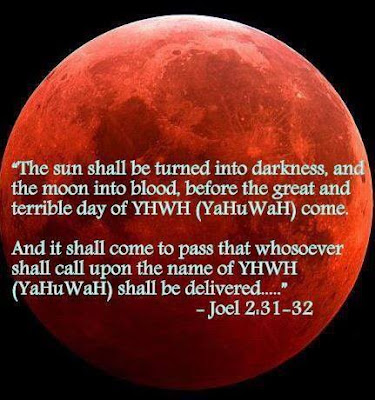