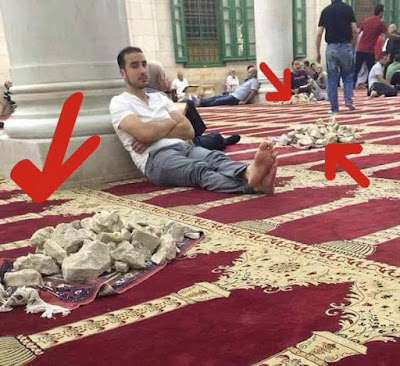 This is how Arabs prepare themselves in a mosque on the Temple Mount. Not for prayer, but to throw at Jews during the high holy days on the Jewish calendar.

The rock throwing Palestinians use mosques as shelter between hurling rocks at Israeli Jews.
By the way, a 65 year old Jew was killed when Palestinian Arabs hurled rocks at his car when he was driving home from Rosh HaShana dinner with family.

Five Israeli policemen were hospitalized as a result of Arab violence yet Jordan's King Abdullah told David Cameron that he may have to reconsider Jordan's relationship with Israel if the Arab riots continue. The king should insist that Arabs respect the holy place in Jerusalem as a place of prayer not conflict.

Israel's Prime Minister has called an emergency security meeting this evening and has promised stringent measures to contain the recent Arab provocations and violence in Jerusalem.