France is Doomed! Falling under the Genesis 12:3 Curse now! 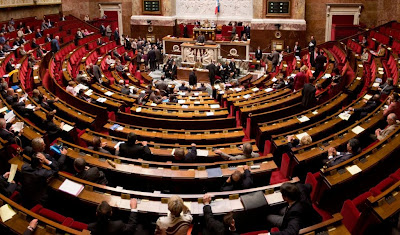 France's lower house of Parliament has voted Tuesday to urge the government to recognize a Palestinian state, in the hope that speeds up peace efforts after decades of conflict.

The vote, approved with 339 votes to 151, is non-binding. But it is a symbolic boost for the Palestinians, amid growing support in Europe for two states. The measure asks the government "to recognize the state of Palestine in view of reaching a definitive settlement to the conflict."

The French government supports a Palestinian state but says it's too early for recognition. France, a veto-wielding member of the UN Security Council, wants peace talks to restart first.

Israel is committed to the establishment of a Palestinian state under a peace agreement, but says such resolutions encourage the Palestinians to avoid negotiations.

On October 30, Sweden's government became the first western European nation in the EU to recognize Palestinian statehood. Since then, lawmakers in Britain, Spain and Ireland have approved non-binding motions urging recognition.

Last week members of the European Parliament began debating whether they can agree on a common approach for the European Union's 28 member states.

France - which has western Europe's largest Muslim and Jewish populations, and has seen tensions erupt between them - has sought to keep good ties with Israeli and Palestinian authorities in recent years.

Israel's ambassador to France spoke out against the proposed resolution last week, saying it was destructive for the peace effort.

Analysis: Why Recognition of Palestinian State Could Fuel Mideast Fire