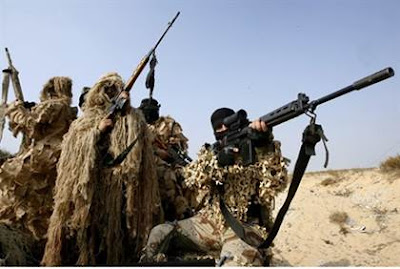 
An IDF soldier is in critical condition after terrorist snipers in Gaza opened fire on Israeli forces late Wednesday morning.

The IDF soldiers were guarding work on the security barrier with Gaza in the vicinity of Kibbutz Nirim and Nir Oz, to the south of the Hamas stronghold, when they came under fire.

The wounded soldier was evacuated for medical treatment at Soroka Medical Center in Be'er Sheva. His family has been notified.

"As a result of the attack, an IDF combat soldier from the Bedouin Reconnaissance Battalion suffered a severe chest injury," an army statement said.

After being shot at, soldiers returned fire at the sources of the gunfire. According to Palestinian Arab reports, there is a heavy exchange of fire going on, which reportedly includes tank shell fire from the IDF and airstrikes by the IAF.

Tayseer al-Ismary (33), head of the surveillance unit in Hamas's "armed wing" Al-Qassam Brigades, was killed by a by Israeli return fire according to local medical sources, and two other Gazans were wounded.

"In response to the firing at our forces who were east of the fence in the southern Gaza Strip, we carried out immediate attacks against the relevant targets," read an IDF statement.