Western media and even some politicians have in the past described stone-throwing and the hurling Molotov cocktails (firebombs) by Palestinians as “peaceful protest.” But a number of incidents over the past several years have demonstrated that stones and firebombs can kill just as easily as bullets, especially when targeting Jewish vehicles traveling on local highways.

That’s what happened on Thursday evening, when Palestinian assailants lobbed a firebomb at the car of Avner Shapira, who was driving home to the Jerusalem-area community of Ma’aleh Shomron with his 11-year-old daughter, Ayala.

Both father and daughter were injured in the attack. Ayala suffered third degree burns over most of her body and had to be placed in a medically-induced coma as doctors worked frantically to save her life.

By Friday afternoon, Ayala had reportedly improved slightly after doctors managed to open a small airway through her severely burned throat.

Earlier on Friday morning, a knife-wielding Palestinian Muslim stabbed two Israeli police officers following Islamic prayer services atop the Temple Mount. The assailant managed to flee the scene after stabbing one officer in the neck and the other in the hand. Both victims were listed in light condition.

These two incidents are in addition to the numerous rock, firebomb and other physical assaults against Jews in and around Jerusalem that did not result in injury, and where therefore not widely reported.

Local residents continue to speak of a “Silent Intifada,” a wave of low-profile terrorist violence that has the city’s Jewish inhabitants increasingly on edge. 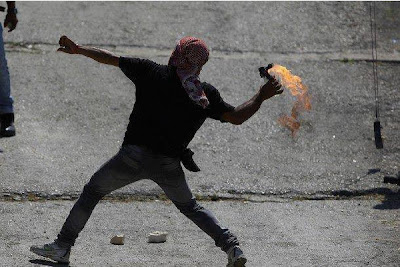