Jane Kiel is a Christian Danish Zionist living in Israel, who posted a video of herself two months ago saying the "Shema Yisrael" statement of faith on the Temple Mount. In this video we witness two Muslims who claim to be Jordanian police approach Jane and accuse her of having prayed in the al aqsa mosque and tell her she has to leave the Temple Mount.

This video addresses a number of important points:

2 If the two Muslims are indeed Jordanian police than this is evidence of a change in the Temple Mount status quo as a result of last week's agreement between Israeli Prime Minister Netanyahu, US Secretary of State Kerry, and Jordan's king Abdullah. The proposal to allow plains clothes Jordanian police onto the Temple Mount was reported to have been discussed between the three parties. Israel later denied that this was agreed to.

This video is evidence of a very serious deterioration in the ongoing degradation of Israeli sovereignty and human rights on the Temple Mount. 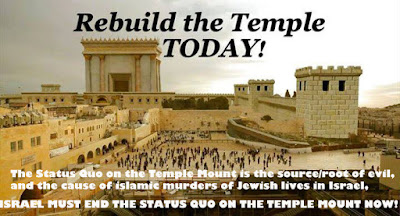