So it is now official. Syria is “juden rein” 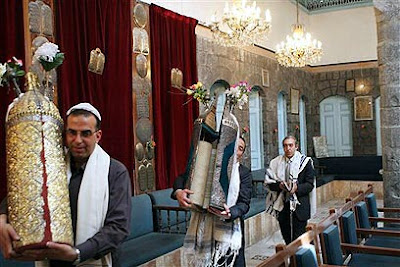 The last Syrian Jews have now been evacuated by a very secret operation in Halav (Aleppo), and there are no more Jews living in Syria. This has brought the end of over 3000 years of Jewish existence in Syria.

The last few Jews were smuggled out of Syria with a very special and daring operation that involved great danger, but with the help of G-d, was successful. They had to be smuggled through battlefields where one did not know who was your enemy and who was a friend and which rebel group was in control at that hour and who would stop you on the road out.

This story will soon be told of this incredible mission that was carried out by Israel to save the remaining Jews of Syria. They were a very Holy community and had very great Rabbis throughout their very rich history. Their contribution to the Jewish people is immeasurable. Rabbi Chaim Vittol z”l was the Talmud of the Arizal and wrote a few great books in kabbalah that are not fully understood today.

Throughout the world there are prominent and very active Syrian communities that left years ago, but have stuck to their very rich culture. It will now be up to them to continue their traditions and pass it on to the next generations.

It is so hard to think that the Syrian Jews we know today are now going to be the last and lost over time.

Today is a very tragic day in the history of the Jewish people.

The Jews left in Yemen are also in very great danger and the authorities there have given the Jews an ultimatum of either converting to Islam or leaving the country. I sincerely hope something similar to this operation is being done for them too. That community also goes back thousands of years and it looks like the end of the Jewish era in Yemen too.