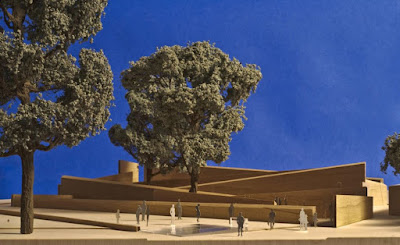 Daniel Libeskind-designed Memorial of Names for Amsterdam, in commemoration of 102,000 Dutch Jews and others murdered in the Holocaust (courtesy)

Set to include the names of 102,000 Dutch Holocaust victims, the memorial will be built along the city’s Weesperstraat Boulevard, between the world-renowned Hermitage Museum and nearby plush botanical gardens. Across town from the Anne Frank House, Weesperstraat runs through the vanished 'Jodenbuurt' Jewish neighborhood, the pre-Holocaust home of most of the city’s Jews.