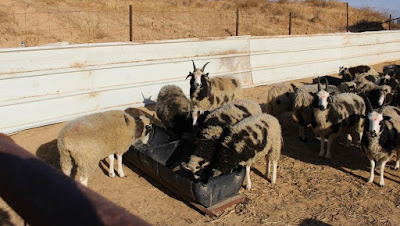 The sheep have landed. After three years of high-level negotiations between the Israeli and Canadian governments, 119 heritage sheep, which trace their lineage back 5,000 years to the Middle East, began arriving in Israel on November 30. It is the first time that the breed, called Jacob’s sheep, has been represented in Israel since biblical times.

Three of the 11 flights carrying the sheep have already arrived in Israel, according to Gil and Jenna Lewinsky, the shepherds who began raising these ovines on a whim in western Canada. “The first sheep arrived on the Jewish calendar the day that Noah came out of the ark, the 28th of Heshvan,” said Jenna Lewinsky.

“It was beautiful to see them walk on the soil of Israel,” she said. “As a Jewish person I am so connected to the land, but to see the whole project connecting — it’s going to stay with me for the rest of my life.” Jenna Lewinsky immigrated to Israel just three weeks before the first flight of sheep came on their own baa-liyah.

Genetic markings for the breed date back at least a few thousand years to the Middle East. The journey for the sheep began in ancient Syria (also the biblical home of Laban) and passed through North Africa. Moorish invaders brought the breed to Spain, and then to England, where the animal was something of a trophy sheep. A number were brought to North America, originally for zoos and then later for commercial use.

Genetic markings have traced the Jacob sheep from ancient Syria, through North Africa, to Europe and then North America (courtesy Gil Lewinsky)

The breed received the name “Jacob sheep” based on Genesis Chapter 30, where Jacob talks about leaving his father-in-law Laban’s home and taking part of the flock as his payment for years of service. “I will pass through all thy flock today, removing from thence every speckled and spotted one, and every dark one among the sheep, and the spotted and speckled among the goats; and of such shall be my hire,” he is quoted as saying in Genesis 30:32.

The path of the breed mirrors the path of Jacob to Canaan and then Egypt. While the Jews were in Egypt, the sheep were incorporated into the North African flocks. Somewhere along the way, although the Jews returned to Israel, the uniquely speckled sheep did not return with them. According to the Lewinskys, the sheep has not been found in Israel for thousands of years.

Gil and Jenna Lewinsky also found meaning in the fact that the first sheep arrived during the week leading up to the reading of the Torah portion of Vayetzei, which is the first time that the uniquely speckled Jacob’s sheep are mentioned in the Torah in Genesis.