Donald Trump Names Pro-Israël David Friedman as the next US ambassador to Israel, 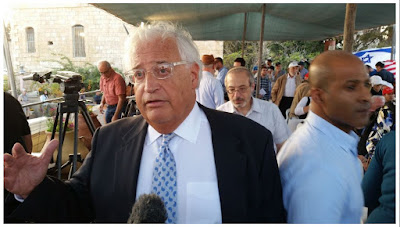 The Yesha Council of settlements on Friday praised President-elect Donald Trump’s choice of adviser and long-time friend David Friedman as the next US ambassador to Israel, citing his “knowledge and wisdom of the issues.”

“Friedman has a deep love for all of the land and people of Israel, including those in Judea and Samaria,” said Oded Revivi, the mayor of the Efrat settlement and Yesha’s foreign envoy, in a statement.

“David Friedman is a true friend and partner of the State of Israel and the settlements,” said a statement from Dagan, the head of the Samaria Regional Council in the West Bank. Dagan said Trump’s choice of Friedman shows that the president-elect “intends to be committed to Israel in an honest and genuine way,”

The head of the centrist Yesh Atid party, Yair Lapid, and Deputy Foreign Minister Tzipi Hotovely of Likud praised Friedman’s appointment Friday, as well as Trump’s apparent plan to follow through on his campaign pledge to move the US embassy from Tel Aviv to Jerusalem.

“I look forward to working with the new US ambassador, a close friend of Israel, David Friedman, in a place worthy of his office — our capital, Jerusalem,” Lapid said.

Deputy Foreign Minister Tzipi Hotovely called the appointment “good news for Israel.” Friedman’s “positions reflect the desire to strengthen the status of Jerusalem as the capital of Israel at this time and an understanding that the settlements were never the real problem in the region,” she said in a statement.

Zionist Organization of America chief Morton Klein, a Trump supporter, said Friedman “has the potential to be the greatest US ambassador to Israel ever.”