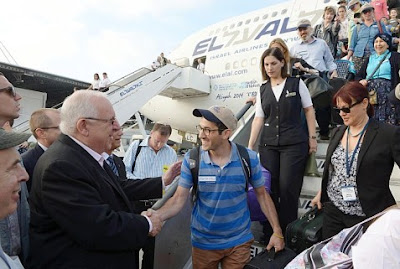 France for the first time topped the list of countries of origin for immigrants, with nearly 7,000 Jews moving to Israel in 2014, double the 3,400 who came last year.

The other unusual rate of aliyah was from the Ukraine, from where 5,820 Jews moved to Israel, nearly three times the 2,020 who made aliyah in the previous year.

Jewish Agency Natan Sharansky chairman said, “2014 was a year of record-breaking Aliyah. This year also saw a historic shift: for the first time in Israel’s history, the number of immigrants who came to Israel from the free world is greater than that of immigrants fleeing countries in distress.

“This trend is evidence of Israel’s attractiveness as a place where it’s good to live, as well as of the success of our joint efforts to promote aliyah and strengthen connections between Jews around the world and the State of Israel.”

Minister of Aliyah and Immigrant Absorption Sofa Landver said that she expects that another 10,000 new immigrants will come from France in 2014.