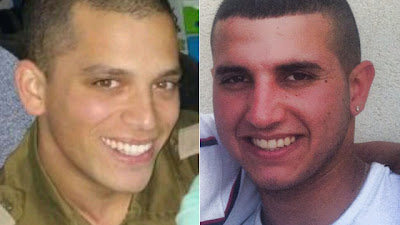 Yohai Kalangel, 25, from the Har Gilo settlement in the West Bank, was married to Tali and a father of a one-year-old girl. He was the commander of the Tzabar Battalion's supporting company, and received the president's award for excellence on Independence Day last year. He was posthumously promoted to the rank of Major.

Dor Nini, 20, from Moshav Shtulim near Ashdod, was a combat soldiuer at the Givati Brigade's Tzabar battalion. Nini, who fought in Gaza during Operation Protective Edge, was posthumously promoted to the rank of Staff Sergeant.

The incident occurred at about 11:30am Wednesday, when a Hezbollah anti-tank missile hit an IDF convoy near Har Dov and Shebaa Farms, a disputed tract of land where the borders of Israel, Lebanon and Syria meet.

The troops that were hit were conducting a patrol in the sector as part of the high alert level in the north. The soldiers stationed in the area were supposed to serve as reinforcement troops in the case of escalation.