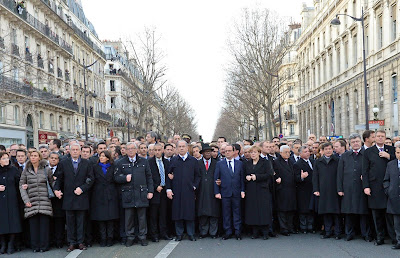 Nothing shows the West's lack of seriousness about terrorism more than the shameful presence of Palestinian leader Mahmoud Abbas at the mass demo in Paris. If the Charlie Hebdo massacre had taken place in Israel, Abbas would have named a square after the killers

What on Earth was Palestinian leader Mahmoud Abbas doing at Sunday's mass demonstration in Paris against terrorism in general and the twin massacres by Islamists of the Charlie Hebdo journalists and the Jews at the Kosher supermarket last week?

If you don't get the point instantaneously you're part of the problem, or at least you've probably spent too much time watching, reading and listening to the BBC... which may, of course, amount to the same thing.

It beggars belief. Abbas's Palestinian Authority glorifies terrorism as a matter of policy. Countless squares and streets in the areas that he controls have been named after terrorists who have slaughtered men, women and children.

It is not in any way a cute point, but if the people who murdered the journalists at Charlie Hebdo and the Jews in the Kosher supermarket had been Palestinians, and the civilians they had murdered had been Israelis, Abbas would have already named a square after them.

It is the grossest expression of opportunism for Abbas to be in Paris for the demonstration at all. He's there because he's worried that terrorism has been given a bad name, not because he opposes it.

As for the clowns who invited him, well, it's just another illustration of our total lack of seriousness. But, by now, who could be surprised by that? 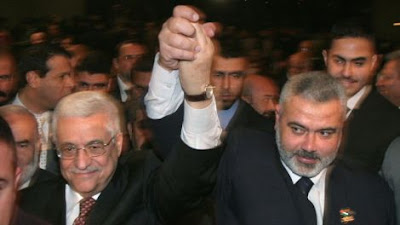