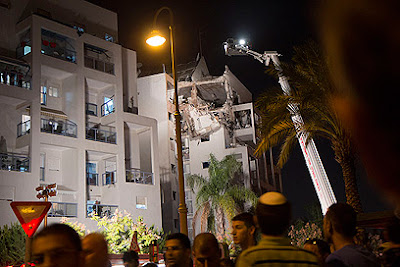 A residential building in the central Israeli city of Rishon Lezion was directly hit by a rocket that was fired by Hamas, lightly injuring two people. Three others suffered panic attacks.

The projectile hit the building's top floor, causing severe damage. Most of the residents sought shelter upon hearing the air raid siren that sounded around 6 pm.

Kfir Rosen, 26, a resident of the building, sustained very light injuries in the Fajr-5 rocket blast.

"My brother and I were on the porch when the siren went off," he said. "We wanted to see the rocket being intercepted so we didn't go into the shelter. The siren ended so I thought everything was fine, until we heard a very loud blast. Rocks fell on us from the top floor."

Rosen was expected to be discharged from the hospital on Tuesday night, but his family had no apartment to go back to.

"We can't go home," he said, "As far as we know they're evacuating the building. We'll sleep at our relatives' home tonight."

Miriam Nahman, 70, was lightly hurt by shrapnel when she failed to reach the shelter in time.

"I've been in tougher situations, I'm realistic," she said. "My kids are stressed. Better I than them."

Liora and Ami Pinhas, a couple who live on the top floor, said the fact that they survived the attack was "a miracle."

"God saved us," Liora said. "We heard the siren, went into the shelter and then we head a loud blast… when we came out we could hardly open the door, and then we saw that our house was gone. Nothing was left.

"It's an indescribable miracle that we're alive," she added. 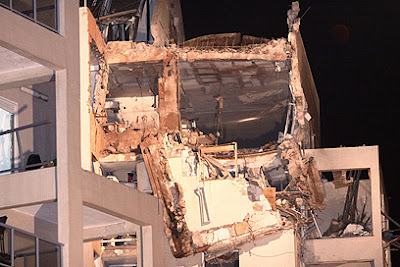