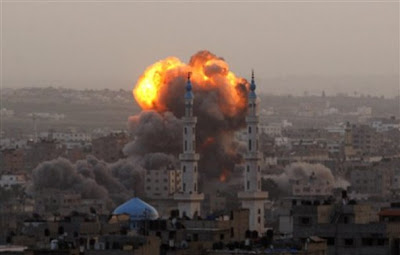 “For three sins of Gaza,
even for four, I [God, the Lord] will not relent.
Because she took captive whole communities
and sold them to Edom,
7 I will send fire on the walls of Gaza
that will consume her fortresses.
8 I will destroy the king[d] of Ashdod
and the one who holds the scepter in Ashkelon.
I will turn my hand against Ekron,
till the last of the Philistines [Palestinians] are dead,”
says the Sovereign Lord.

Gaza will be abandoned
and Ashkelon left in ruins.
At midday Ashdod will be emptied
and Ekron uprooted.
5 Woe to you who live by the sea,
you Kerethite people;
the word of the Lord is against you,
Canaan, land of the Philistines.
He says, “I will destroy you,
and none will be left.”
6 The land by the sea will become pastures
having wells for shepherds
and pens for flocks.
7 That land will belong
to the remnant of the people of Judah [the Jews, Israel];
there they will find pasture.
In the evening they will lie down
in the houses of Ashkelon.
The Lord their God will care for them;
he will restore their fortunes.

Ashkelon will see it and fear;
Gaza will writhe in agony,
and Ekron too, for her hope will wither.
Gaza will lose her king
and Ashkelon will be deserted.
6 A mongrel people will occupy Ashdod,
and I will put an end to the pride of the Philistines.
7 I will take the blood from their mouths,
the forbidden food from between their teeth.
Those who are left [and repent, convert] will belong to our God
and become a clan in Judah,
and Ekron will be like the Jebusites [people of Jerusalem].
8 But I will encamp at my temple
to guard it against marauding forces.
Never again will an oppressor overrun my people,
for now I am keeping watch.