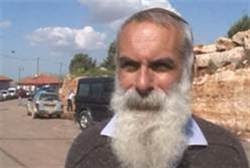 Speaking with Arutz Sheva, he explained his feeling thus:

"You had tens of thousands of soldiers here, from the standing army and mostly the reserves, who left everything – the family, work – and came immediately, out of a strong desire to stop the immense chutzpah of the terror groups, which have started to get us used to having missiles fired at Jerusalem, Rishon Letzion and Tel Aviv.

"The ceasefire, in my eyes, is a great mistake and a disappointment to many."

The very negotiations with terror groups are strictly forbidden," he said, "even if they are carried out through interlocutors. In actuality, we granted legitimacy to the Hamas organization, which was considered a terror group in the eyes of many countries in the world. We spoke to them and turned them into a legitimate organization. This kind of thing must not happen. The Americans don't talk to Al Qaeda, either."

"The great IDF stood here facing a disgusting and vile terror organization and signed an agreement with them. This is a big, unfortunate farce. We have given them great strength now, look at the victory celebrations."

Rabbi Ronsky said that the IDF should have reconquered the Philadelphi Route – the corridor that runs along Gaza's border with Sinai – in order to stop weapons smuggling into Gaza. "It's true that diplomatically this is complicated, because it is the Egyptian border, but there is no choice. Our sovereignty has been violated."