‘Taking down Hamas is a necessity, not just for Israel, but for humanity,’ 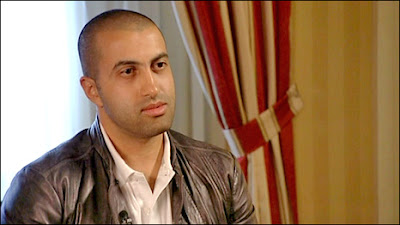 Sounding more like the frustrated resident of a southern Israeli city after suffering days of sirens and rocket strikes than the son of one of Hamas’s founders, Mosab Hassan Yousef told Israel’s Channel 2 News on Friday that taking down his father’s terror organization “is a necessity, not just for Israel, but for humanity.”

Speaking from a safe house in a secret US location 48 hours after a fragile ceasefire ended eight days of Israeli-Hamas conflict, the former terror operative turned Israeli informant said, “Let’s not forget that our enemy is a barbarian enemy and they are using women and children as a shield.”

“Hamas was born to destroy. Hamas does not know how to build,” he said. “I doubt they will be able to build a modern Palestinian state and hope their lies will be exposed to the Palestinian public.”

The son of Hamas founder Sheikh Hassan Yousef, Mosab Yousef broke ranks with Hamas in 1997 and began working for the Israeli domestic intelligence service Shin Bet. Ten years later, after helping Israel thwart dozens of terror attacks and arrest many members of his former movement, Yousef left for the United States where he sought political asylum and later converted to Christianity.

Speaking as footage of air force jets pounding Hamas targets in Gaza, and of IDF soldiers preparing their tanks for a possible incursion, played in the background, Yousef said that “If Hamas continues to threaten the security of the state of Israel, I believe Israel has the ability and the capacity to control the borders and cut off the weapons supply.”

Yousef said he was not surprised to see Hamas had proved capable of firing at cites in the center of Israel, as it did on several occasions over the week, aiming for Tel Aviv and Jerusalem. “I think the Israeli intelligence knew about Hamas’s capacity. That was a test to see what Hamas has in storage, and today we know their ability more than any time in the past. I am sure this will allow us to prepare for what is beyond the horizon,” Yousef said.

The solution, according to Yousef, is to educate Gazans about their real friends and foes. ”We need to expose the lies and educate the Palestinian public that Israel is not the enemy. Israel actualy helps the people of Gaza more than anybody else,” he said. “We need the average Palestinian to see this clearly.”

Addressing video footage of Hamas operatives dragging a body of a suspected collaborator with Israel through the streets of Gaza earlier this week, Yousef said: “Hamas thinks they can kill the will of people by intimidation. Most of those who are killed in the Gaza Strip for the suspicion of collaborating with Israel, have nothing to do with Israel.”

Asked if he ever desires to return to his West Bank hometown of Ramallah, Yousef chuckled, saying, “Everybody knows what the result would be. I am not interested in going to Ramallah as of now, but I hope at some point in the future there will be a new generation that prays for peace and co-existence. If this happens I would love to go back to Ramallah, at least to visit.”

Yousef concluded the English-language interview with a smile and by wishing viewers Shabbat Shalom, a good Sabbath, in Hebrew.