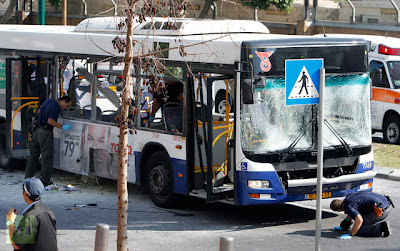 A terrorist left a bomb that exploded in a Dan bus originating in the nearby city of Bat Yam on Shaul HaMelech street in central Tel Aviv, around noon. Three people suffered serious injuries, two of whom needed surgery and are being operated on as this is written.

No one was killed, although the area teems with Israelis as it is the location of the Tel Aviv courts, banks and major businesses.

Twenty-one people have been evacuated to Icholov Hospital, just one street away, most of them with lesser injuries. Others are being treated for emotional shock.

Eyewitnesses said that that the terrorist boarded the bus, placed a suspicious package there and then fled. Others said he threw a briefcase into the middle of the bus. Police arrested one suspect but later released him when it became clear he had no connection with the attack.

Authorities said there was no advance warning of a terrorist attack. No terrorist group has yet taken responsibility for the attack, but Islamic Jihad and Hamas have threatened to strike anywhere in Israel.

TV images showed the bus with its windows blown out and its metal frame contorted from the force of the blast, in images reminiscent of scenes from previous terrorist bombings in the Second Intifada, also known as the Oslo War.

The front window was completely shattered and glass littered the floor as the wounded were loaded into ambulances by an army of medics.


Netanyahu's spokesman said it was "a terrorist attack."

Gaza Arabs celebrated the attack, and Hamas officials said it was carried out in revenge for Israeli aerial bombings in Gaza that killed several members of one family. 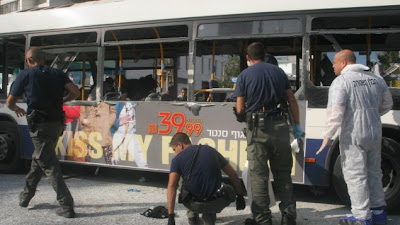