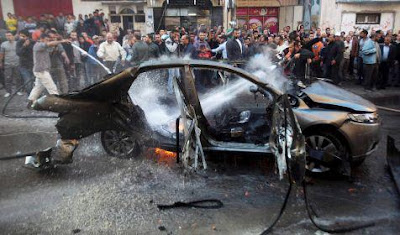 The Israel Defense Forces has released a video showing the targeted killing of Hamas military chief Ahmed Al-Jabari on Wednesday, along with his son who was in the car with him. The IDF said Jabari's assassination marked the beginning of Operation Pillar of Defense against Gaza terrorists.

As part of the operation, Israeli aircraft struck at least 20 rocket-launching pads belonging to Hamas and Islamic Jihad. Dozens of long-range rockets were destroyed, including Fajr-5 missiles. The destroyed rockets and missiles had a range of more than 40 kilometers (25 miles).

In the two days, IDF Chief of Staff Benny Gantz held a series of marathonic discussions at the South Command and Gaza Division in a bid to approve plans to assassinate senior members of Hamas, the Islamic Jihad and other terror organizations in the Gaza Strip.

IDF Spokesman Yoav Mordechai said that "the chief of staff gave the green light to launch the attack in a bid to deal heavy blows to the Hamas organization and other organizations. Jabari is the first target, and as far as I understand, no one managed to escape from his car.

"We have just begun and this is not the end of the story. All options remain on the table and our determination to continue and hit all the organizations hard will continue. The IDF has launched an attack against terrorist targets in Gaza."