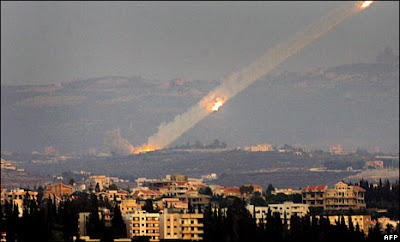 Two rockets were fired from southern Lebanon towards the Israeli border on Wednesday evening, a Lebanese security official told AFP.

"Two rockets were fired, one fell in what was clearly Lebanese territory, the other went towards Israel," the official said on condition of anonymity.

It was not immediately clear where the second rocket fell.rockets fall in israel from lebanon

On Monday, two Katyusha missiles aimed at Israel were discovered in southern Lebanon's Mazra'at Halta, near the Kfat Shuba Hills, approximately four kilometers (2.5 miles) away from the Lebanon-Israel border.

A Lebanese military official said that the rockets, which were successfully dismantled by the Lebanese army, had been fully equipped with timers and were ready to be fired at the Jewish state.

The official said that terrorists based in Lebanon launch rockets at Israel "every time there is an aggression against Gaza."

Hizbullah leader Hassan Nasrallah pledged on Monday the Lebanese Shiite group's support for Hamas terrorists in Gaza in light of Operation Pillar of Defense, insisting it was unaffected by differences over the conflict in Syria.

"Some are saying that Israel is punishing Hamas for they think it was abandoned by Iran, Syria and Hizbullah," Nasrallah said in a speech to supporters in Beirut.

"Iran, Syria and Hizbullah will not give up on the people of Gaza and its resistance, and this is our religious and moral and humanitarian obligation," he said.

News of the rocket launchings first emerged after it had been announced that Israel and Hamas had agreed upon a cease-fire agreement to end the most recent wave of violence.