There is No Occupation of Palestinian Land

The Myth, Lie and falsehood of the term 'Occupation' - A great factfinding article to read for all who oppose the right of the Jewish people to live and to own their (God given) Land. 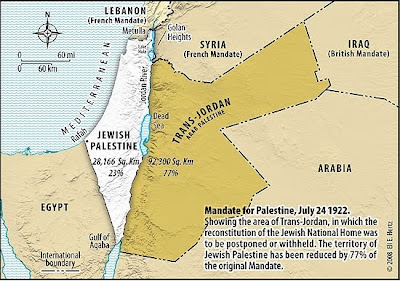 There is No "Occupation"

by Morton A. Klein

To begin with, nearly all Palestinian Arabs currently live under 'palestinian' rule, not Israel's. (except for many Arabs who live freely and work in Israel). Following the signing of the Oslo accords, the Israelis withdrew from nearly half of the territories, including the cities where 98.5% of Palestinian Arabs reside. The notion that the Palestinian Arabs are living under "Israeli occupation" is simply false. The areas from which Israel has not withdrawn are virtually uninhabited, except for the 2% where Israelis reside.

The term "occupation" is also used to indicate that Israel has no right to any presence in Judea-Samaria-Gaza or the Old City section of Jerusalem, and that the Israeli presence in any of those areas constitutes illegal "occupation" of someone else's land. In fact, Israel has the strongest religious, historical, and legal claim to this land, The territories of Judea-Samaria-Gaza and the Old City of Jerusalem were integral parts of the Jewish kingdoms throughout the biblical eras, and are explicitly mandated by the Hebrew Bible as part of the Land of Israel.

These lands were Jewish thousands years ago, under King David, King Solomon, and other Jewish rulers; can anybody name a Palestinian Arab king who ever ruled over "Palestine"? No--because there never were any.

All of the most important Jewish religious sites are situated in those territories. The very name "Judea" --a term which was commonly used by the international community throughout all the centuries until the Jordanian occupation in 1949-- is derived from the same root as the word "Jew," testifying to the deep Jewish connection to the land. The reason Jews are called "Jews" is because we come from Judea. This historical-religious right was the basis for the League of Nations decision, in 1922, to endorse the Jewish people's right to all of the Holy Land, on both sides of the Jordan River.

From the standpoint of international law, it is important to note that prior to 1967, there was no other recognized sovereign power in the territories. Israel's capture of Judea-Samaria-Gaza and the Old City of Jerusalem in 1967 did not constitute an illegal "occupation" of someone else's land, because prior to 1967, there was no legal or recognized sovereign power there. The Jordanian occupation Judea-Samaria and Jerusalem during 1949-1967 was illegal, having been carried out in defiance of the United Nations Security Council. The only countries in the world to recognize it were Pakistan and (in part) England.

Furthermore, Israel captured the territories in self-defense. Israel took over Judea-Samaria-Gaza and the Old City of Jerusalem in self-defense, in response to aggression by Jordan and Egypt in June 1967. Had Jordan not invaded Israel --ignoring pleas by Israel to stay out of the war-- Israel would not control Judea and Samaria today. As former State Department Legal Adviser and former head of the International Court of Justice in the Hague, Stephen Schwebel, has written: "Where the prior holder of territory had seized that territory unlawfully, the state which subsequently takes that territory in the lawful exercise of self-defence has, against that prior holder, better title."

It is also significant that U.N. Security Council Resolution 242 does not require complete Israeli withdrawal from the territories. Resolution 242 requires Israel to withdraw "from territories" captured in 1967, but the authors of the resolution deliberately left out the word 'the' before 'territories' because it was their conviction --as articulated by then-British foreign secretary George Brown-- "that Israel will not withdraw from all the territories." The Soviets tried to insert 'the', but that effort was specifically rejected so as not to suggest that Israel is obliged to surrender all of the territories.

Finally, it should also be noted that the Oslo Accords recognize Israel's right to remain in the territories, at least until a final settlement is reached. The Oslo accords accept Israel's presence in the territories at least until an Israel-PA agreement on the final status of those areas. Chapter 2, Article X, Clause 4, specifically recognize that in the disputed territories, "Israel shall continue to carry the responsibility for external security, as well as the responsibility for overall security of Israelis for the purpose of safeguarding their internal security and public order" until a final accord is reached. Furthermore, the Oslo accords do not require Israel to dismantle any of the Israeli communities in Judea-Samaria-Gaza--in effect, an acknowledgment of Israel's right to maintain those communities, at least until a final-status agreement is reached.

In short, the notion that there is an illegal Israeli "occupation" is a myth.
Source: www.zoa.org/pressrel/20020510b.htm
Gepost door Henoch op vrijdag, november 23, 2012