The Stupidity of a ceasefire / truce between Israel and Islamic Gaza 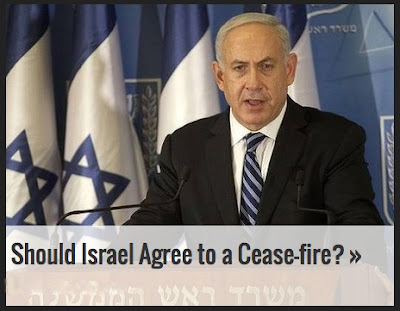 For us this 'ceasefire' deal is an unbelievable - what will become - one of the biggest historical mistakes/errors, the Israeli Government under lead of Bibi Netanyahu could make. The following points tell you why:

1. The 'struggle' for Hamas & Jihad calls not for any two-state solution, but for a Jew-free 'palestine', which include the whole land/area of Israel.

2. Opening of the Rafah-crossing and Egypt-border for Gazans going freely in and out, will be a fully opened area for Jihadists entering, arms and rocket prviding, to the Islamist Jihad including Hamas in the Gaza-Strip.

3. Hamas is an offspring of Egypt's radical Muslim Brotherhood, which will be eager to undiscriminatly bring long-range Iranian rockets with large explosive-heads into Gaza for the next assault on Israel and it's civilians.

4. Hamas aim and goal isn't more freedom for the 'palestinian' people in Gaza, but to reconquer the land of Israel for Islam, and turn it into a taliban-style Islamic sharia-led state (by the way, without Jews/Israelies or born-again Christians).

5. Hamas & Jihad only believe in the Islamic 'hudna'-truce, a partial 'rest' for military terror re-building, re-strenghthening, re-grouping, and re-arming.

6. The Islamic terror-rulers in Gaza are bloodthirsty barbarics, antisemites, murderers, their own wife-beaters and rapers, brainwashing their children into Jew/Christian hating suicide-bombers, where Israel never can make a true peace with.

The Western World seems totally blind and ignorant of these facts, probably because they hate Israel and the Jewish people in their inner-core themselves, although they always will deny this at the surface.

Israel is now asking, by this so called 'ceasefire, for the next assault and blow of Hamas and Islamic Jihad on their own soil, whichby many more Israelies will loose their lives and will be murdered.

The only just and righhtious thing Israel had to do was, taking over Gaza by ground-offensive, throw out and kill the Hamastans & Jihadists, save the 'palestinian' people of Gaza, and re-take Gaza for Israel forever.

Read: Should Israel Agree to a Cease-fire? 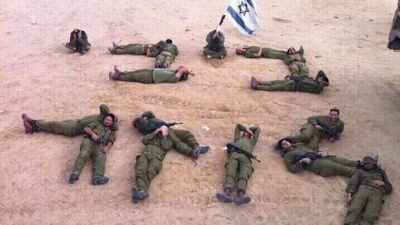 Iraeli Soldiers use their bodies to spell 'Bibi [is a] loser' for not going into Gaza ground-battle.
Gepost door Henoch op donderdag, november 22, 2012