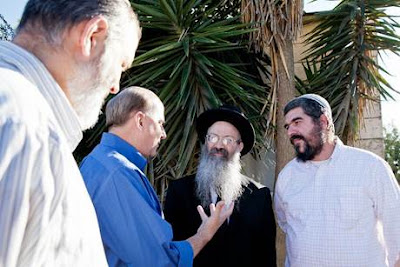 Prominent Religious Zionism rabbi blames Israeli Left for security situation which led to Gaza conflict, says media biased. 'Their idol is Peace Now and they are responsible for all our troubles,' he argues

Rabbi Eliezer Melamed, one of the most prominent Religious Zionism rabbis, has launched an unprecedented attack on the Israeli Left and media on the backdrop of the recent security situation.

Melamed, who serves as rabbi of the Har Bracha community and head of the local yeshiva, blamed the Left for the security situation which led to the recent conflict in Gaza and accused the media of biased coverage and cover-up.

"Had the Israeli established media been honest, it would have played recordings of all the leaders responsible for the Oslo Accords and the pullout from Gaza, so that the entire public could hear their stupid promises and understand just how distorted their ability to analyze reality really is."

In a scathing column published Friday in the Besheva newspaper, Rabbi Melamed wrote: "It seems that the more we criticize the Israeli media establishment, we will still be missing the truth compared to the harsh criticism it really deserves."

He explained that "the people leading the media establishment have estranged themselves from their people and heritage. Indeed, they wouldn't dare say anything against the soldiers or residents of the south and center who are under attack, but deep inside they adopt the justice in the enemy's stand."

The rabbi used harsh words to attack the Israeli Left and media, referring to them as godless, idolaters and dreamers. "While the loyalists of Torah, the people and the land present real estimates, the pagans are trapped in illusions and false hopes, which are shattered in our faces time and again.

"The reason is that they are as devout in their idolatry. Their idol is called Peace Now or 'human rights', and this is precisely the sin of idolaters, who take one value and worship it without taking the other values into account."

He added that "the leftists, who estranged themselves from their Jewish heritage, are looking for an idol to give their life hope and meaning. Most of them believed in Communism once and made many people's lives miserable. Now they believe in Peace Now and are responsible for all our troubles…

"Many are already aware of the appalling bias of the media and Left's 'experts', their estrangement from their people and homeland. Many understand that their commentaries and analyses are a sort of entertainment, which has a very weak connection to reality and logic. We have to reemphasize the leftists' guilt again and again. Repeat the 'we told you so' phrases 1,000 times. Continue to distribute videos of their foolish remarks on social networks."