Authorities Launch Mass Arrests Of Christians, Men And Women Dragged To Prisons All Across Iran

Please pray for Christians in Iran and for all Christians in the Islamic world that they be given the strength to hold fast to the faith of Jesus and endure until the end …
Revelation 2:10, “Do not fear any of those things which you are about to suffer. Indeed, the devil is about to throw some of you into prison, that you may be tested, and you will have tribulation ten days. Be faithful until death, and I will give you the crown of life.”

TEHRAN, IRAN (BosNewsLife)– Massive arrests of evangelical Protestant Christians, including many former Muslims, are reported in Iran, with men and women being dragged to prisons across the Islamic nation. ‘We have learned that at least 100, but perhaps as many as 400 people, have been detained over the last 10 days,’ said Firouz Khandjani, a council member of the ‘Church of Iran’ house church movement. Speaking from an undisclosed location, he told BosNewsLife late Saturday, October 13, that forces of the feared intelligence service, who he called ‘Iran’s Gestapo’, broke up worship services in Esfehan, Shiraz and Tehran areas. ‘They are of several movements. But it has become clear that Protestant Christians are now viewed as enemy number one of the state,’ Khandjani said. ‘We need urgent prayers,’ he added when asked what believers need most.

He said among those detained late Friday, October 12, are at least five members of the Church of Iran in the city of Shiraz, including Mohammad Roghangir, known locally as ‘Brother Vahid’, who led a house church service attended by some 15 people. ‘We are also concerned about sister Roxana Forughi as this is the second time she is being detained.’ Other Christians captured during the same raid were identified as Eskandar Rezaie, Bijan Haghighi, Mehdi Ameruni and Shahin Lahooti. Iranian Christians said they were taken to the notorious detention center Plaque 100 of Iran’s Intelligence Ministry.

Khandjani confirmed reports that on Thursday, October 11, seven Christians received suspended five year sentences for ‘action against the national security,’ after they were already jailed for up to three weeks in Rasht, some six years ago. He said he was also concerned about the situation of Christians taken to prisons in recent days. ‘We know that many have been forced to say they will no longer attend church services in exchange for freedom.’ There was no immediate response from Iranian officials. The latest reported crackdown comes on the eve of the October 15 trial of five Christian converts detained in Adel-Abad prison eight months ago following a raid on a house church in Shiraz.

Since their arrests, the five been confined in cells housing dangerous criminals on charges of ‘creating illegal groups’, ‘participating in a house church service’, ‘propagation against the Islamic regime’ and ‘defaming Islamic holy figures through Christian evangelizing,’ Iranian Christians said. There is also concern about the health of several church leaders detained earlier, including Iranian Pastor Behnam Irani, who potentially faces the death penalty for ‘apostasy’, or abandoning Islam.

Christians have said he suffers of ‘various medical problems’ in part because of prison mistreatment. Despite the reported persecution, there may be at least 100,000 evangelical Christians in Iran, according to church groups, with others giving higher estimates.” Source – BosNewsLife. 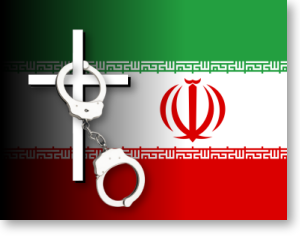